Projects with diverse female leadership are also well-received
When looking at the average Metacritic scores for movies between 2007 and 2019, those directed by women of color scored the highest. 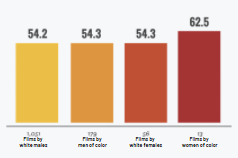 Data and graphic from the Annenberg Inclusion Initiative

The excuse is often given that women of color aren’t hired because they don’t have the necessary experience. But how can they get the experience if they aren’t hired?

Ava DuVernay pushed back on the experience issue. She hires all female directors for her show Queen Sugar, many of whom don’t have television directing experience but have other related experience.

“I wanted to make something in my likeness, which meant asking, can I bring in women who’ve never directed television before? Can that be done? We proved it can.”

As consumers, we control what we watch and support with our time and money.
– Commit to watching a certain number of titles each month created by and featuring people who don’t look like you
– Critically consume any title you watch. Do you notice a difference between titles led by white women and women of color?
– Amplify projects created by women of color. Share them on social media, tell your friends about them, and get the word out